Realistic Exercise Takes CAVIT Students Out of the Classroom 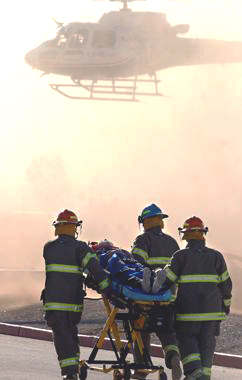 COOLIDGE, Students in the Central Arizona Valley Institute of Technology’s fire science, law enforcement and emergency medical technology programs demonstrated their skills Wednesday with an emergency preparedness scenario. Law enforcement student Capt. Rachel Wheeler said they knew ahead of time that it would involve a high-speed crash, but they did not know any of the details — like how many people were in the vehicles and how many were injured. Law enforcement Capt. Lorenzo Teruya said the situation was that a car had failed to yield for a traffic stop, sped away and hit another vehicle.

The crash site was staged, of course. Law enforcement students had already been trained to handle traffic stops and pursuits, he said. “That actually allowed us to apply it in this scenario.” Fire science students used an extrication tool to remove two people who were trapped in their car, then assess their injuries and call in the EMTs. One of the victims was pulled out of the car and transported to a waiting helicopter to replicate a “hot” load — loading a patient onto a helicopter while it is running. The helicopter, provided by LifeNet, took the patient from the school grounds to a hospital. The other crash victim was put on a stretcher and loaded into an ambulance for transport to a hospital.

Fire Battalion Chief Jefferson Letner said the judges were looking for proper patient care and how well the incident command system worked. The students had trained for two years. “We trained and practiced, and we got to put it all together at the accident scene,” he said. Fire Capt. Adrianna Alaniz said the scenario allowed her to experience what it was like on the incident command site. “That’s really big in the fire service,” she said, “and I believe in the future I’m going to be much more prepared because we actually went through an entire exercise for it.”

Lorenzo said this was the first year CAVIT had an incident command center. Those usually involve multiple agencies working together. Rachel, Adrianna and Jefferson were part of the crew running the command center. Adrianna said the most difficult part of the exercise was communicating well and trying to understand what was going on with fire, EMT and law enforcement personnel. Liaisons ran back and forth, keeping them informed. “It was also exciting,” she said, “because you get to learn how to actually communicate and run a system efficiently so everyone does it safely. They do it right and everyone gets transported.” Lorenzo said it was the first time law enforcement students had worked “hand-to-hand” with fire and EMT students. “The most exciting part was absolutely the chase,” he added, “’cause I was the initial officer to conduct the chase, and being the first one to show up on scene to handle the scene. That was the most exciting part — up until calling for fire to respond and EMT to respond.” Jefferson said the most exciting part was when the helicopter landed, “to know that my students, my fire students, are helping to land the helicopter and load the patient.” Rachel said the law enforcement evaluators were from the Casa Grande Police Department, the Pinal County Sheriff’s Office and the U.S. Border Patrol. Jefferson said the fire science evaluators were from the Casa Grande Fire Department, the Coolidge Fire Department and the Arizona City Fire Department.

CAVIT Superintendent Mike Glover said the EMT evaluators were from Casa Grande Regional Medical Center and the fire departments. Students were evaluated using the same rubrics used by county officials during their emergency scenarios. Glover said the scenario was the culminating activity for two years of training for CAVIT’s fire and law enforcement students and one year of training for the EMT students. “The teachers partnered with all of the Pinal County emergency staff to put on this event,” he said. It also provided practice for the evaluators.