Arizona’s Kevin English was recently elected into the ACTE Region V Hall of Fame. Kevin represents all that we hope to see in our Hall of Fame inductees. He is service-oriented, hardworking and dedicated to CTE. Kevin has actively served as an officer in several affiliates as well as a participant on a variety of committees at the state, region, and national level. As a Region V Vice President, Kevin was responsible for bringing the Fellows Program from Arizona to Region V. He then was a principal architect in the Fellows Program being adopted and instituted at the national level. Many of our Region V Fellows have become National Fellows as well. Kevin can easily be identified with the work and purposes of Region V and the Association for Career and Technical Education.

“Region V has a great history of impacting all ACTE members,” Kevin said. “It is great to be part of this all star team!!!” 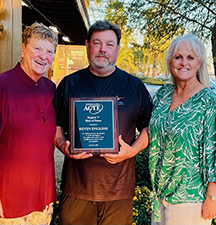 Pictured with Kevin is Past Region V Vice President Dodie Bemis, who made the presentation, and Debbie Moore, who submitted Kevin’s nomination.

Other Arizona members of the Region V Hall of Fame include Mary Anne Berens, Pam Ferguson, and Chuck Gallagher.