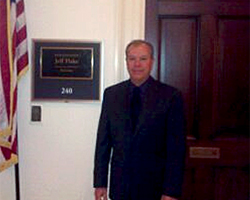 I have been working in the Mesa Unified School District for the past 23 years. During this time, I regretfully never became involved with ACTE until this year. Since joining ACTE last year, I now realize what I have been missing. As a Freshman Fellow for ACTEAZ, I have been exposed to a whole new world. The most recent event that I participated in was the National Policy Seminar, which took place in Washington D.C. Like all of the events that I have been exposed to these past few months (National Convention in St. Louis and Mid-Winter Conference in Prescott), I went in not knowing what to expect. I would be lying if I said that I wasn’t thoroughly surprised and overwhelmed.

I had never been to Washington D.C. before this visit and the entire atmosphere was breath taking. We had training meetings on Monday that were very helpful in explaining what we might expect. This definitely set my mind at ease. We received plenty of useful information about the policies that are affecting us and what procedures to follow. The next two days were followed by more meetings in the morning and afternoon visits to “The Hill”. It was all very exciting and memorable. On Tuesday, we visited Representative Jeff Flake’s office. We timed our visit perfectly, as Representative Flake was just leaving his office as we arrived. We were able to talk with him and express the CTE point of view of how valuable we are in the educational arena. We then were able to meet one on one with one of his aides.

The following day, we met with one of Representative David Schweikerts’ aides. I felt that both meetings went over very well and that we were able to have productive talks with both of the representatives’ aides. During this trip, I meet many other groups there doing exactly what we were doing, which was letting their congressmen and representatives know about their programs and how they need funding to keep going.

I came to realize just how important the work that we are doing really is. If we do not spread the word about our programs, no one else will. Overall, I found this to be a very rewarding experience and encourage anyone that has not gone in the past to get involved and attend a future National Policy Seminar.